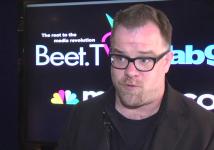 VIEQUES, PR – Video news created exclusively for the Web gets about twice as many streams per clip as videos from broadcast programming, says Stokes Young, Executive Producer of MSNBC.com in this interview with Beet.TV

Web original news account for about 10 percent of videos surfaced on MSNBC.com, the joint venture of NBC Universal and Microsoft.   The site surfaces television news video from NBC News and MSNBC, the cable network.

“Off-air clips from NBC News air and MSNBC TV cable continue to account for the lion’s share of the videos available on msnbc.com, and for the majority of the video plays.  But teams from across NBC News produce video specifically for their digital audience, and the average clip produced for the web gets around twice as many streams as the average off-air clip.”

The Power of Metadata

In this interview, Young explains that video views for MSNBC.com videos have gotten a big boost from automated transcripts which are distributed on the Web.   This has been extremely productive in raising the search engine optimization around the clips, he says.

We spoke with him at the Beet.TV Executive Retreat in Vieques where he was a participant.