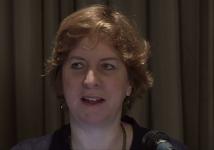 Radio is "the most durable" form of media, says Vivian Schiller, Chief Digital Officer of NBC News and former NPR CEO in this video.  And, its value will increase with advent of Internet-connected cars, she adds.

Earlier this month, NBC News anounced a major program to syndicate news to hundreds of radio stations in the United States.  In this video, she says NBC News is "doubling down" on radio.

Schiller was the keynote speaker at the Beet.TV Executive Retreat in Vieques, Puerto Rico.