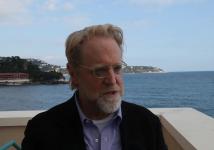 VIEQUES, PR — As online video consumption has exploded with over 45 billion videos viewed per month in the United States, the amount of advertising viewed is quite limited; there are in-stream ads around just one percent of video views in the United, says Eli Goodman, comsScore's Media Evangelist in this interview taped at the Beet.TV Executive Retreat.

While the the amount of ads is limited, the average time spent on watching ad ad has risen to 15% from 13% last year, Goodman says.  He suggests that the "ad load" – the amount of advertising in  online video should and will increase.

While much of video advertising is direct response, he says the future is in brand advertising — like television.   However, he warns marketers not to simply move television creative into the Web video medium.

For more videos of the Retreat, please visit this page.