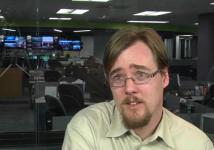 WASHINGTON – Rob Malda, aka CmdrTaco, co-founder and former editor-in-chief of Slashdot has joined the The Washington Post Company's WaPo Labs as Chief Strategist and Editor-at-Large.

We spoke with him earlier today in the Post's newsroom about the the changing nature of journalism, the power of video and his reasons for joining the company.

Malda's appointment was announced on Monday.  Here's his blog post.