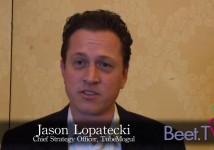 LAS VEGAS — Already this year, video ad platform TubeMogul has run more more than a dozen ad campaigns through connected TVs and is gearing up for a big year in this new medium, the company's Chief Strategy Officer Jason Lopatecki told Beet.TV in an interview at CES.

The ad inventory is currently being sold in the app space in home screens on connected TVs from set makers such as LG and Samsung, he explained.

TubeMogul added connected TVs to its lineup late last year, as part of a growing trend among video ad networks and platform companies to also syndicate to smart TVs. He expects ad formats on connected TVs to move beyond pre-rolls into new forms shortly.

By Daisy Whitney on January 20, 2012 @daisywhitney