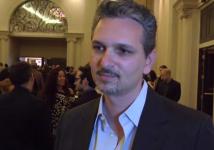 We caught up with him earlier this month at the International Academy of Web Television Awards at CES.

Blip.tv won the IAWTV Award for best video platform.  While the win wasn't a true industry triumph as neither YouTube or Vimeo were nominated, it was a clear acknowledgment by the Academy for the big video site's role in cultivating so many aspiring web creators.

Disclosure:  Beet.TV uses Blip.tv as its primary publishing platform and has a commercial arrangement.