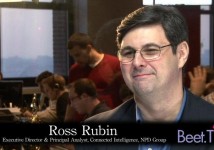 Although Windows phones have a small position in the U.S. marketplace, consumers are positively inclined to give the device a try, says Ross Rubin, Executive Director and Principal Analyst, Connected Intelligence at NPD Group.

Rubin says the initial opportunity for Microsoft are budget-conscious consumers who are not users of the iPhone or the Android system. He calls the new OS "approachable and consistent" and says users will find it familiar, given its likeness to the Windows desktop OS.

He says that while Microsoft has been late to the smart phone game, it has been successful in attracting developers and is committing big resources to the platform. For the software giant, "failure is not an option," he says.

Rubin was interviewed in this segment by by CNET's Maggie Reardon at a 2-hour Webcast produced at the Livestream studios in Manhattan.