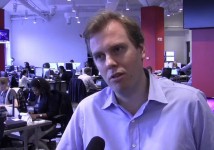 Global Revolution, the organization which is managing the live Web video streaming of a number of Occupy Wall Street protests, has purchased several 4G devices which allows cameras with a small attachment to stream directly to Livestream.

According to Livestream CEO, Global Revolution has purchased 10 devices called the Cube.

The battery-operated device allows fast, high-quality streaming without the need to use a PC to encode the file.

Livestream has streamed 1.7 billion minutes of live video around the globe in October, Haot tells Beet.TV.

In the United States in October, there were 411 million minutes of live video views, comScore's Dan Piech tells the New York Times' Jennifer Preston in her story today on the growth of live streaming.

Preston reports how live streaming has been an integral part of the social media strategy around the  global Occupy Wall Street movement.

Earlier this year, we spoke with Livestream CEO Max Haot about the the new 4G device. We have republished the video today.

Livestream has been the live streaming partner of Beet.TV for some time. We often use the company's studio for live programming. We will stream a 90-minute preview to CES this Wednesday at 2 ET, from their Manhattan studio.

Very happy to welcome back to the show Doug Ray, who holds the title Chief Product Officer, dentsu Americas & Global Media We’ve covered Doug for a number of years and he’s always innovating, seeing what’s next and leading the industry. In his role he is deeply involved with the changing the media landscape. One […]