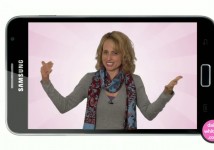 Headquartered in Bucharest and Madrid, the company's market focus is primarily the United States and other English-language markets, Constantin says.

We spoke earlier this month at the Monaco Media Forum