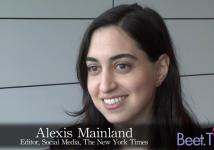 The New York Times has launched a program to bring documentary filmmakers, both famous and aspiring, to the digital pages of the paper in a new program called Op-Doc.

The documentaries are surfaced on the Opinion Page section of the paper.

Although the films are on the Op-Ed pages, they are not necessarily timely takes on topics in the news, but documentaries on a range of topics.

The films are selected by the Times and the paper is doing some commissions.

The first film debuted this past weekend, a short piece by Penny Lane and Brian L. Frye which discuses the impact of Nixon’s “Silent Majority” on American politics. The speech was originally delivered on November 3, 1969. The video accompanies an op-ed by Matthew Lassiter.

Separately, The Times continues to publish video opinion pieces which address topics in the news.   Recently, the paper published a documentary by Robert Redford opposing a gas pipeline.

Last week, we spoke with Jason Spingarn-Koff, the video journalist who runs video for the Opinion Page about Op-Doc.