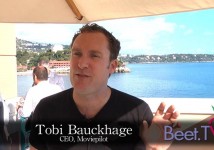 MONACO – Moviepilot, a Berlin-based social networking site which recommends and drives moviegoers to opening weekend screenings, has recently launched in the U.S. and has some four million fans on Facebook, says Tobi Bauckhage, CEO and founder, in this interview with Beet.TV.

We spoke earlier this month at the Monaco Media Forum.

Bauckhage speaks about the vitality of the start-up scene in Berlin.