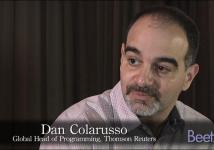 Taboola, the video recommendation platform which generates related thumbnail images on the pages of major news sites, including Bloomberg, CNN, Gannett and The New York Times, now has agreements with Reuters and the Washington Post.

The company provides its service to publishers for free in exchange for the placement of text ads sprinkled among the thumbnails. Recently, the company has been experimenting with inserting third-party videos instead of the text ads.

In this new scenario, still in beta, third-party publishers, who are publishers in the Taboola network, pay when their videos are clicked to play.

For an overview on Taboola, we spoke with Ira Silberstein, SVP of Client Services.  Silberstein joined Taboola earlier this year from The New York Times where he was VP for Product Management.

Taboola has senior management and sales operations in New York and technical operations in Israel.  In August, the company raised a Series B round of $9 million.

Some News and a Disclosure:

Beet.TV has signed with Taboola and will surface thumbnails of related Beet.TV videos along with third-party videos. The program is expected to be implemented later this month.

We are pleased that Taboola is sponsoring Beet.TV for the month of October, which includes a 90-minute Webcast on October 26 at 2 p.m. EDT on video journalism.

The event, live from the Livestream studios in Manhattan,  will feature top editors and executives from CBS News, Gannett, The New York Times, the Wall Street Journal and others.

Below is how Taboola creates video thumbnails which are displayed on the video pages of The New York Times.