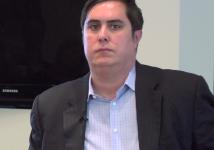 The new programs, which are aimed at a female demographic aged 25-54, launch next month.

The shows will cover a variety of topics and feature creative talent including Judy Greer ("Jeff Who Lives at Home," "Californication," "27 Dresses"), Niecy Nash ("Reno 911," "Dancing with the Stars"), Morgan Spurlock ("Super Size Me," "30 Days"), and others.

The episodes will each run 3-8 minutes long .

While virtually all of Yahoo! episodic programming is first sold to a sponsor and then produced, the media company has "deficit-financed" this batch of Web originals.

We spoke with McPherson yesterday at the Yahoo! television studios in Santa Monica.  She talks about the programming, the scope of the Yahoo! video audience and how Facebook has been driving views.

Here's a report on the new programming by Andrew Wallenstein at Variety.