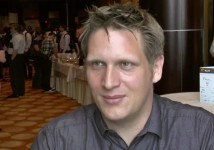 AMSTERDAM/SAN FRANCISCO – At the big IBC show in Amsterdam, Adobe announced the introduction of Flash Media Server 4.5, a platform for publishers to deliver Flash content to Apple iOS devices, including the iPad and iPhone.

In this pre-event conversation with Ashley Still, we get an update on the new server along with other news, including the new DRM solution for Android and an updated Open Source Media Framework.

Still is Director of Video Solutions at Adobe Systems.