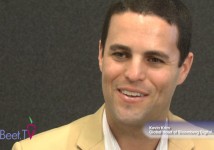 Views of videos on Bloomberg.com doubled on Monday (8.8) as turmoil roiled the global markets, a spokesperson has told Beet.TV via email.  Overall traffic to the site on that day was up 62 percent over the average.

The number of unique video viewers who watched video on the site was up 3X.

Earlier this year, we spoke with Kevin Krim, Bloomberg's global head of digital, about the redesign of the big business site and its increasingly multimedia format.  We have republished that interview today.

Below is a "historic" screen shot of Bloomberg TV reporting the S&P downgrade on August 5.