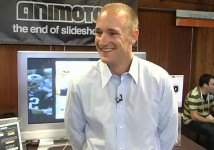 Animoto, a company which allows users to create custom videos from a sort of "clipboard" in the sky, has raised $25 million in venture funding.

The new round is for mobile expansion, to allow users to create moble video on the run, reports Ryan Lawler at NewTeeVee.

At the TechCrunch 50 in San Francisco in 2008, we interviewed CEO Brad Jefferson.  We republished the interview today.