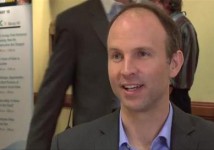 The Wall Street Journal is training its print reporters to use the iPhone 4 for video news gathering and live streaming via Skype Video, says Kevin Delaney, Managing Editor of the WSJ.com

After deploying Sony camcorders and Kodak pocket cameras, the Journal has settled on the iPhone 4 as the device of choice for field reporting, he says in this interview with Beet.TV.  Some reporters are using an external mics, he told me.

The iPhone is in the hands of about two dozen reporters with more to be provided to many of 2000 Journal and Dow Jones newswire staffers around the world, he says.

In February, we reported that The New York Times had begun to use the iPhone 4 for video reporting.

I spoke with Delaney on Tuesday at the Streaming Media East conference where he was a panelist on a session I moderated on the topic of online video journalism.

Below is a photo of the panel, from left to right:  Craig Duff, head of multimedia for Time.com; Kevin Delaney; your correspondent; and Ann Derry, editorial director of video and television for The New York Times.