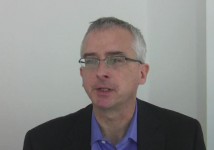 The New York Times, which features a short article and photo of a couple of dozen newly-weds every Sunday in the Style section, will be adding short videos created by the couples.  The first user-generated video will be published this weekend.

The solicitation for 1-3 minute videos was recently added to the bottom of  the Times' wedding announcement submission form.

Wedding videos for the weekly Vows column have been produced for five years by Times video journalists.

Yesterday at the Streaming Media East conference, I sat down with Ann Derry, editorial director for television and video for The New York Times, to talk about the new experiment with UGC, the expanding impact of the daily newsroom show TimesCast and trends in video journalism.

Derry also speaks about some of the notable video features being produced including video obituaries which are produced late in the life an individual who are designated for obits.   Our recent favorite was the one of film director Sidney Lumet.

At Streaming Media East, Derry was participant in a panel about online video journalism along with Craig Duff, multimedia director of Time.com; Kevin Delaney, Managing Editor of the WSJ.com and Jim Spencer, CEO of Newsy.   I moderated.