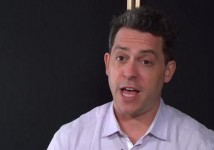 With a fast-growing digital spports news business and investment backing from Accel Partners, Comcast, and Allen & Company, SB Nation is aiming to be a "great media company" in various content verticals, CEO Jim Bankoff tells Beet.TV in this interview.

The company made its first big content move outside of sports with the hiring of several former Engadget staffers, including editor Joshua Toplosky, who are creating a new technology blog, which is unnamed and will luanch in the early Fall.

Not waiting for the launch, the star bloggers are publishing on a temporary site titled thisismynext.com.

To accomodate the new blog, SB Nation is opening a New York office and bureau in the Union Square area, Bankoff says. The company is headquartered in Washington, D.C.

We spoke with him in our studio last week.