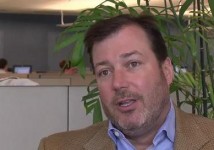 Reuters, a leading provider of live news video to television broadcasters around the globe, is now making a rich offering of live video feeds available to  digital publishers, says Chris Ahearn, president of media for Thomson Reuters, in this interview with Beet.TV

The new offering, called Reuters Live Stream, launched last week with the the Royal Wedding.  The new service was used by the Tribune Company for several of its newspapers.

While live streaming of major news events is common on cable sites such as MSNBC.com and CNN.com and FOX.com, live programming is not generally available to smaller publishers.  Ahearn sees a big opportunity for his company as live video becomes increasingly part of the digital offering — both online and on mobile.

The offering is a changing daily menu of several live streams, from White House press briefings to the closing bell of the New York Stock Exchange.

The service is a commercial product which Reuters charges according to the size of the publisher and content use.

The Associated Press has been streaming live programming recently, mostly special events including the Oscar's Red Carpet coverage and the Royal Wedding.   The AP provides its service in an alliance with the New York-based Livestream.

More on this story by David Kaplan over at paidContent