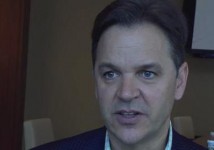 The announcement late Sunday evening by President Obama that Osama Bin Laden had been killed created extraordinary traffic for MSNBC.com and pointed the emerging role of online video viewing in cable-connected homes.

In this interview with Beet.TV, Charles Tillinghast, President of MSNBC.com, says there were some 300,000 simultaneous video views of the President's announcement, a very high number during non-work hours.

While it is difficult to say how many of these online viewers also subscribe to cable, Tillinghast says the high numbers indicate how consumers multi-task around breaking news, watching television but using the Web to get briefed when they join a story, in what he calls "reading in" and "watching in."

Viewership Sunday night on MSNBC, the cable channel, passed 1.1 million, according to TV Newser.  Here's a report in The New York Times about broadcast television viewership that night.

We spoke with Tillinghast late yesterday afternoon at the WPP Global Video Summit where he was a speaker. The event was hosted by Kantar Video, a WPP unit.