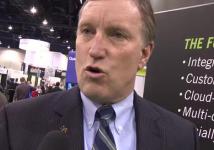 For the past 10 months, Gawker Media has used Viddler to manage its online video distribution. The Viddler player powers Gizmodo, Gawker TV and other properties.

Unlike the vast majority of online video news sites which seek broad sharing and distribution of clips, the videos on the Gawker Network do not provide embed codes or other standard sharing tools. Management has configured the Viddler player so video consumption is just for the site’s pages.

The management of Gawker’s video is just part of the fast-growing portfolio of major publishers who are working with the Bethlehem, Pennsylvania-based Viddler, which includes Engadget and other AOL properties. You can also find the player on the Sony PlayStation blog.

We spoke with Rob Sandie, President of Viddler, last week at the Streaming Media East conference.

He is a 2006 graduate of Lehigh University, in Bethlehem. During college, he did an internship at Macromedia in San Francisco in the Flash Media Server group. (Macromedia was later purchased by Adobe.)

Sandie co-founded Viddler with Donna DeMarco in 2006 as a consumer video sharing site. The company has evolved into a provider of “white label” online video services to businesses and organizations. Its business is software-as-a-service.

The company has raised $2 million, has 25 employees, over 1,000 customers, serves over 70 million video views per month, and is profitable, he says.

Competing in the highly competitive sector against some very well capitalized companies, Sandie says his company is making significant progress with advanced technology and lower costs in the form of “pay as you go” customer terms.