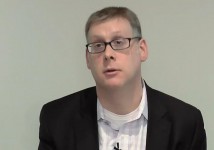 BOSTON — The television doesn't need additional fragmentation, but a simple platform to deliver IPTV via Apps, says Sam Chang, GM of Innovation and Development for LG.

He advocates an open source web technology which works with Google Chrome and Apple's Safari.

LG has a partnership with the big online video platform company Brightcove to deliver video to LG television sets.

We spoke with Chang last week at the Brightcove global customer conference.

Disclosure:  This segment was produced as part of sponsorship by Brightcove.