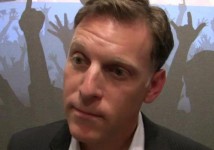 With the acquisition of Next New Networks, YouTube aims to expand its legion of independent content creator by many thousands, creating both short and long form programming in various verticals says Tom Pickett, YouTube's Director of Global Content Operations and Lance Podell, Director, Global Head of YouTube Next Lab.

Says Pickett, there are now 22,000 content partners at YouTube and "hundreds of them" are making "six figures."  He says that payment for content creators has increased three-fold in each of the past two years.

Podell, who had served as CEO of Next New Networks, explains how many of the tools used by NNN to develop its 70 independent producers, are being applied at YouTube on a far bigger scale.

Pickett says that some ten percent of video views are now seen on mobile devices — and the move to connected TV's is making the term "online video" less germaine as videos appear on multiple platforms.

We spoke with Pickett and Podell after their keynote address on Monday at the IAB Digital Video conference.