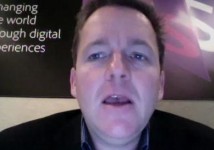 LAS VEGAS (via Skype Video)  — Although Adobe's ubiquitous Flash Player is not on Apple's iOS devices, its Flash Media Server will soon allow publishers to stream the same live video format to these devices as well to the desktop, Android and some smart TV's, according to Kevin Towes, senior product manager for Adobe's Flash Media Server group.

We interviewed Towes earlier today from the floor of the NAB Conference via Skype Video.  Earlier this week, Towes blogged about the new server capabilities.  More on this development by Ryan Lawler at NewTeeVee.

Towes also spoke about the value of the peer-to-peer capability of Flash Player 10 and how it is being utilized.