Arianna Huffington: We Won’t “Mess with” TechCrunch or Engadget: Tim Armstrong Has Big Plans for Video 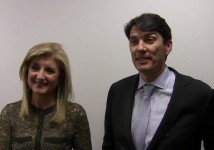 As the Huffington Post merges with AOL, the company will leave its successful brands to operate as independent entities.  Arianna Huffington, who will be editorial chief of the new company, tells Beet.TV in this video that she "won't mess" with successful AOL properties including TechCrunch and Engadget.

Addressing the issue of HuffPo contributors who may be reluctant to publish on AOL, Huffington dismisses these concerns and says that the platform for the bloggers in the newly merged company will be vastly bigger and very attractive.

Also in the interview, AOL CEO Tim Armstrong addresses the company's commitment and plans around video. He says the company has spent $200 million around video in the last year and will spend more around international expansion.

He says that the Huffington Post will embrace video in a significant way.

Beet.TV spoke with Huffington and Armstrong at the paidContentent2011 conference in Manhattan immediately after their on-stage interview with paidContent editor Staci D. Kramer.

Disclaimer:  Beet.TV has a commercial syndication agreement with AOL/5min.  (Which, btw, has tripled our video views in 60 days.)