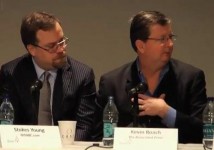 WASHINGTON  — The Associated Press declined to stream President Obama’s 30-minute live interview on YouTube (on 1.27) since the program was shot on White House cameras, says the AP’s Kevin Roach, Vice President & Director of U.S. Broadcast Operations, in this segment from the Beet.TV Online Video Journalism Summit at The Washington Post.

The role of the government, business and organizations in creating television operations poses journalistic challenges for news organizations who prefer to manage news gathering on their own or via a collaborative “pool.”

Discussing this subject in this clip (in order of appearance) is Stokes Young, head of multimedia at MSNBC.com, Roach, Anna Robertson who heads original video of Yahoo! News, and Mike Stephanovich, managing editor of the Reuters Insider.

The Associated Press is the biggest provider of news video to YouTube.   It has had some 650 million video views in the four years since the channel launched, Roach told Beet.TV in an interview last Monday at the AP’s Washington bureau.