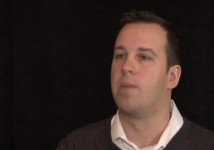 He attended the recent YuMe road show in New York and spoke to Beet.TV about the findings.

That’s a promising trend for advertisers and marketers to keep in mind, Turcotte said. “A lot of CPG companies are looking for how to effectively target females 34 to 64,” he said, adding that it’s making more sense now to view online video almost like a daypart the same way marketers look at cable, prime or even late-night.

Disclaimer:  This is a sponsored post.  We have produced and published this video and several others to be posted under contract with YuMe.  We hope you find this series of videos informative.  AP

By Daisy Whitney on February 15, 2011 @daisywhitney