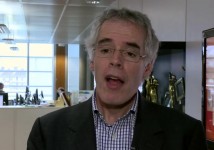 WASHINGTON, DC — The New York Times will provide reporters with the Apple iPhone 4 to record and upload videos via an Aspera App to the paper's server.  The first staffer to use the device was Andrew Ross Sorkin who used it for his Davos coverage.

In the clip, the Sorkin's stand-up was shot by colleague Peter Lattman.  The audio is surprisingly good.

In this interview with Beet.TV, Ann Derry, Editorial Director for Video and Television, characterizes the Apple phone as a "game changer" for the paper's video news gathering operations.

She also spoke about the paper's efforts in covering the crisis in Egypt and that the paper's videos have been prominently position on the Times home page.  She speaks about Times video journalist Stephen Farrell.  Here is one of his reports: Cairo: After Curfew.  Times staffers are filing from Egypt using satellite phones, she explains.

Derry was a panelist at the Beet.TV Online Video Journalism Summit which took place on Tuesday at the Washington Post.