A Canon Still Camera is a “Game Changer” for Video Journalism, the AP’s Kevin Roach 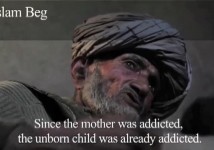 WASHINGTON — Increasing numbers of film makers and videographers are using a "still" camera to create video images of extraordinary quality.

The camera which is getting the most use is the Canon, EOS 5D Mark II, which sells for around $2500.

The camera is widely used by Associated Press photographers who are increasingly using it to shoot video segments.   In this interview with Kevin Roach, the AP's VP for Broadcast News, says that the deployment of the Canon camera has been a "game changer."

In our clip, we have inserted a number of AP clips shot with the Canon.

While the camera creates extraordinary images, there are drawbacks for use as news gathering tool.  The camera has limited sound functionality.  While the video files look amazing they are quite large, meaning memory cards need to swapped out frequently.

We interviewed Roach at the AP's Washington bureau.

Recently, Vimeo hosted an Canon HD video contest where you can find some extraordinary work on display. We have embedded the the final "collaborative" film below.

The Story Beyond the Still – All Chapters – FINAL COLLABORATIVE FILM from Vincent Laforet on Vimeo.