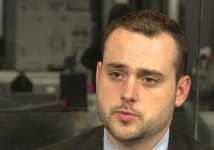 The program is co-produced and co-branded by The Washington Post and Yahoo! It was launched in late September of 2010.  Cillizza is managing editor of PostPolitics.com.  He is author of the Post's insider blog The Fix.

At 1 million daily views, the non-partisan political show has reached an audience the size of of Rachel Maddow's cable show on MSNBC.

Surely not a direct comparison, as the Maddow's show is an hour-long television show, but the success of The Fast Fix points to the opportunities for newspapers to team with big portals and destination sites  like Yahoo!

Yahoo! is the most popular online news site in the United States with 94 million unique visitors in December, according to comScore.

Earlier this week, in the Washington Post newsroom, we spoke with Steven King, head of video editorial at the paper.  He told us about the success of The Fast Fix and the expectation for further expansion of Post video beyond the pages of the paper through devices and partnerships.

King will be a panelist for Tuesday's Beet.TV Online Video Journalism Summit at the Washington Post as will be Anna Robertson, who heads original video for Yahoo!News.

Chris Cillizza will be our feature speaker.  I will kick off the event with a "fireside chat" with him at 9:00 a.m. ET.  Please find the program here on Beet.TV.