Forrester’s McQuivey: Microsoft Could be “Dominant Player in the TV Business Overnight” 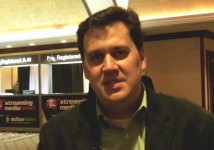 LOS ANGELES — While the television industry is abuzz in anticipation over Google TV, the big story in the convergence of television and the Web could be the Xbox, says Forrester's James McQuivey, a top industry analyst.

With 30 million units installed in the U.S. and 42 million worldwide, the Xbox could become the "dominant player in the television business overnight," he told our correspondent Jamison Tilsner in this interview at the Streaming Media West show.

McQuivey notes that the integration of Kinect, which becomes available today, will provide extraordinary functionality for video viewers.

Last month,  the Xbox controller became a functional remote control for subscribers to the AT&T U-verse.

In this interview, he speaks about the opportunities for Google TV and the serious challenges for Hulu.

Editor's Note:  Welcome Jamison to Beet.TV.  Many of you know Jamison as a founder of Tubefilter.  He is now Evangelist for Kantar Video.  We are delighted to have his contributions from time to time.  AP