Kinect is a New Advertising Platform for Microsoft 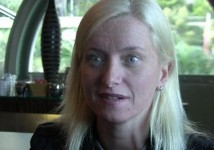 MONACO —  Kinect, the new device for the Xbox console, which allows players to control the game with their untethered bodies, will be a significant, new advertising platform, says Carolyn Everson, head of global advertising sales for Microsoft.

Everson came to Microsoft earlier this year from MTV.

We spoke with her on Wednesday (11.10) at the Monaco Media Forum, the day Kinect was launched in Europe.

Everson says that there are some 42 million Xbox live consoles installed worldwide.

She cites the ad campaign on Kinect for Chevy Volt, as demonstration of the potential of this new medium.  We put some images from the Chey campaign and a game demo into this video.

Kinect is creating quite a bit of attention today in the digital device press.

Everson is headed to Australia this week to push the multi-platform ad offering of Microsoft, The Australian reports.

For an overview on the Monaco Media Forum, check out this report by Adweek’s Brian Morrissey who was a participant.