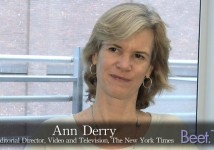 Nominations for Emmy Awards for news and documentaries were announced today.  PBS leads with the most nominations followed by CBS and the other television networks.

In a nod to emerging online video news producers, the National Academy of Television Arts and Sciences nominated several newspapers and Time magazine for their innovative work.

We've been fortunate to interview several innovators in online journalism and have republished an interview with Ann Derry, who heads video and television for The New York Times.

Below is our chat with Craig Duff, director of multimedia at Time.com