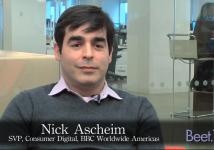 In an effort to maximize advertising dollars around the big U.S. market for online news, the BBC has launched a U.S. destination.

The site will be more U.S.-centric, surfacing up more U.S. based coverage.  In the U.S., the current BBC news site already has some 17 million monthly unique visitors.

In addition to surfacing news stories, the site will feature a number of video feature series, the first being about travel which will launch next month.

For an overview on the launch, we spoke with Miranda Cresswell, Sr. VP for Strategy and Operations for BBC.com.  We met at Tuesday’s paidContent Mobile conference where she was a panelist.

Here is a launch story of the BBC news site in the U.S. by paidContent’s Robert Andrews.