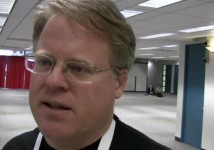 It was four years ago today that this blog had its first big scoop:  Robert Scoble, the ground-breaking video blogger and social media evangelist at Microsoft, would leave to join a Silicon Valley start-up.

Four years on, and a couple of gigs in between, Robert is doing well.  He is seeing increased traffic on his Scobleizer blog, producing widely-watched videos and building a huge social media following, largely on his own.

I caught up with him last month in Manhattan at the TechCrunch Disrupt conference for this update.

Robert is a full-time employee of RackSpace, the Texas-based enterprise hosting company.  The job provides him financial support and editorial autonomy to travel the world to report for his blog and produce videos.

Robert serves as the company's "ambassador" and PR rep in Silicon Valley, he explains in this interview.

He shoots and edits around six videos per week on his YouTube channel and produces two, two-camera videos for his series called Building 43.

Scobleizer blog has been doing well.  According to Compete, it has 185,000 unique visitors, with traffic up about 35 percent this year.

When we met, he showed me a cool new Canon HD Mark II.

He talks about issues facing companies who are seeking to use Web video to enhance their image – it's not as easy as many had thought, he explains.