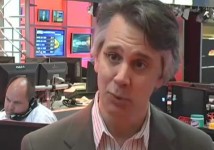 MSNBC.com is readying the release of its first iPad App — it will feature one show on the cable network, said Mark Marvel, at yesterday's Beet.TV Online Video Roundtable.

Marvel, Senior Director of Video at MSNBC.com, declined to say which show will be offered first.

In his report this afternoon about the conference, All Things D MediaMemo Senior Editor Peter Kafka speculates that the program will be the Rachel Maddow Show.

CNN has had an iPhone app since last September.  Although not designed specifically for the iPad, it works on the platform. CNN on the Web is also optimized for HMTL5 for proper video playback on the iPad, a spokesperson told me today.

The CNN App is more of general offering of CNN content, not for a specific program.

Peter helped moderate yesterday's panel which can be watched here.