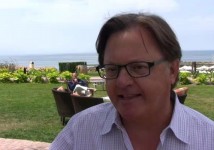 LOS ANGELES — The Huffington Post, one of the first publishers to integrate Facebook Connect and the first to publish a Twitter edition, will soon integrate with LinkedIn, says the HuffPo's CEO Eric Hippeau in this video interview.

I spoke Eric on Wednesday morning at the Wall Street Journal's All Things Digital conference.

On the ad sales front, he says that the company is doing well with direct sales, selling the "old fashioned way," depending less and less on low-priced ad network inventory.

And the site will continue to introduce new topic verticals — the next will be on travel.

Over at TechCrunch, Erick  Schonfeld reports of discussions between Yahoo! and the Huffington Post about content sharing and "rumblings" about a merger between the two.