Apple will Have a Powerful Search Engine for the “AppWorld,” John Battelle 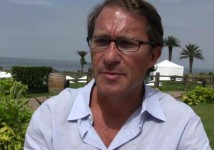 LOS ANGELES — Despite the explicit denial by Apple CEO Steve Jobs on plans to build a search engine, the company is doing exactly that, says John Battelle.

On Tuesday night, during his on-stage dialogue with Kara Swisher and Walt Mossberg at the All Things Digital conference, Jobs talked about the explosion of iPhone and iPad apps, which have passed 200,000 in number and are growing by 20,000 per week.

He painted a picture of fast evolving Internet where Web browsing, particularly on mobile devices, is becoming mostly App-focused, not Web focused.

Yesterday, I spoke with John Battelle, co-founder of Wired, author of the seminal book on Google, and CEO of Federated Media.

He says that Apple's new search engine will not compete with Google, Microsoft, or Yahoo! in indexing Web pages, but it will index Apps.  Actually, this won't be a search engine with queries and results, it will be an automated system to serve personalized results.

Yesterday in his Searchblog, he wrote "Of Course Apple is Going to Do Search"

Some believe that Apple's recent acquisition of Siri is part of this new search effort.