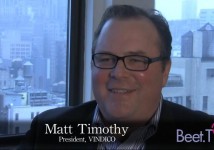 Last week, the San Francisco-based, video ad solution provider FreeWheel announced an additional venture round of $16.8 million from venture and institutional investors, including the venture units of Time Warner and Disney.

We caught up with CEO Doug Knopper last week at Will Richmond's video event for this interview.  Doug talks about international expansion, new products, and the industry's opportunities as significant video advertising dollars migrate from television to online.

FreeWheel provides software-as-a-service to many publishers and video distribution sites, including Blip.tv, which Beet.TV uses as our player.