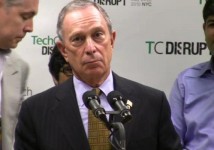 The problem with the media business is not the result of technology, it's about quality of content, said Mayor Michael Bloomberg at a press briefing today at the TechCrunch Disrupt conference.

In response to a question from this reporter, the Mayor, aka media mogul, says that over the past ten years the quality of content is not what it was and that's why consumers aren't buying.  They are "voting with their feet," he said.

Bloomberg addressed the conference to announce the creation of an investment fund for New York City start-ups.