Brightcove and FreeWheel to Enable Video Advertising on the Apple iPad 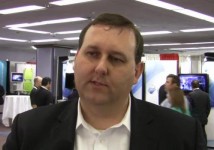 Since the launch of the Apple iPad, many online video publishers have been been working feverishly to get video onto the the popular platform.

Since Apple does not allow Adobe's Flash on the device, publishers use various formats, with HTML5 becoming increasingly popular.  The problem is that this new format is not easily integrated with online video advertising, which has been overwhelming served in Flash.

The integration will begin in June, the companies said in a press release.

Last week, we reported on efforts by Toronto-based mDialogue to provide video ad integration to HTML5.

USA Today's Jefferson Graham writes in today's paper about the impact of the iPad in the online video business. Brightcove's Jeff Whatcott tells Graham that the new competition from the iPad is good for the industry.

Yesterday at the show, I grabbed this shot of Whatcott with Jennifer Taylor from Adobe.  Beet.TV interviewed her as well.   Whatcott is a former Adobe executive.