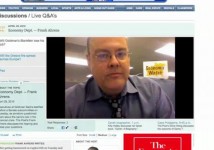 The Washington Post, the first and most innovative major U.S. newspaper to use video as part of  its online news offering, is launching a platform for hundreds of reporters to host their own programs live from their desks on Webcams, via a simple interface with the Post's content management system.

The videos will appear in sections and in the paper's archives.  The format allows reporters to talk about news of the day while taking live text questions from viewers.

Yesterday, we interviewed Hal Straus, the Interactivities and Community Editor for the paper about the new new program which launched on Tuesday.  We interviewed him in the the Post's newsroom via Skype.

The first reporter to participate in the program is financial reporter Frank Ahrens.