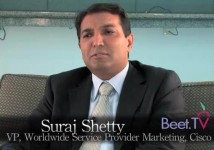 SAN JOSE, Calif. — The amount of data associated with video consumption per user in the United States has reached 12 gibabytes per month — globally it is about 4 GB.

With advent of 3-D video, 4-G mobile, teleconferencing, and other bandwidth intensive video services, consumption per user in the U.S. will eventually reach an astounding 15 terabytes per month, says Cisco.

Daisy sat down with Suraj Shetty, VP of Worldwide Service Provider Marketing, to talk about growing bandwidth demands and the roll out of Cisco's super router CRS-3 later this year.

More to come from Daisy's visit to Cisco.