BBC Surfacing Videos on Home Page and Around Text Stories 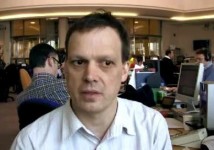 London –The BBC has been surfacing an increasing amount of Web-specific videos and television packages to its giant portal.

Last month we visited the BBC Newsroom Television Centre in West London to speak with Mark Barlex, editor for on-demand video for the BBC.

He provides a tour around the U.K. version of the giant news site and explains the way in which videos are discovered.

You can find our first interview with Mark here.