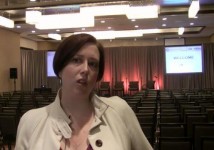 After years of anticipation, it seems that the open source community is ready to publish video on Wikipedia. Users will encode videos with a free codec called Ogg Theora and publish them on an HTML5, open format.

Earlier today, Nicholas Reville of the Participatory Culture Foundation announced the creation of Let's Get Video on Wikipedia, an initiative to educate the public about how to get video up on Wikipedia.

In July in New York at the Open Video Conference, I interviewed Erik Moller, Deputy Director of the Wikimedia Foundation.  Erik explained the imperative around an open source video solution.  We have republished the interview today.

More on this story by Janko Roettgers over at NewTeeVee.

The online video services company that has been developing the open source video tools for Wikipedia is Kaltura.

Also in July in New York, I interviewed Kaltura co-founder Michal Tsur. She speaks about the history of the implementation, browser compatibility, and how the editing tools work.  I have republished this video below.