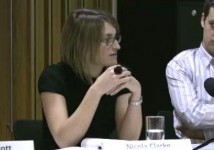 LONDON — BSkyB, the satellite programming service, is getting considerable traction with its online offering, including sustained advertising rates and engagement, which averages 26 minutes according to Nicola Clarke, an executive with the company.

Clarke was a participant at the Beet.TV Online Video Roundtable on Monday.  She was questioned by co-moderator Robert Andrews, editor of paidContentUK.  She is a digital strategist at Sky Digital Media, the ad selling unit of BSkyB.  This segment from the roundtable is published above

After the panel, I interviewed her one-on-one and have published this below.

THANKS! Our London event was graciously hosted by the Guardian and sponsored by Brightcove.