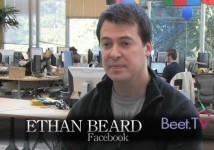 PALO ALTO — Facebook has 80,000 sites using Facebook Connect in addition to the 500,000 applications on Facebook, according to Ethan Beard, who heads up the company's developer network.

The most popular application/category is gaming, says Beard, citing the massive success of Farmville.

In Austin at SXSW, CNET's Caroline McCarthy reports that Facebook is "flexing its gaming muscle."

This is the third of three interviews done by Daisy down at Facebook.