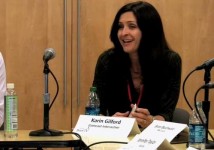 SAN FRANCISCO — Media executives have a love/hate relationship with Apple. They admire the elegant design and usability of its products but decry the restricted "walled garden" that Apple puts up for content creators.

Their ambivalence was clear during this segment of the Beet.TV Online Video Roundtable in San Francisco on Wednesday.  Quipped moderator Kara Swisher, you "live in a beautiful fascist environment."

She asked executives of Fox, NBC, Comcast, CBS, and Universal McCann about the most important company in technology;  three said Apple, two Google, and one Microsoft for the XBox.

The love/hate relationship with Apple and its exclusion of Flash from the iPad is evident over at Conde Nast, as Peter Kafka reports tonight on MediaMemo at AllThingsD.

In his blog, John Battelle writes why he doesn't like the iPad.