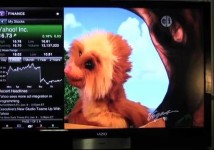 LAS VEGAS, NV –  Yahoo has expanded the scope of its "Connected TV" with several new television and consumer electronics manufactures and expects the platform to be in as many as 5 million Internet-enabled television sets by the end of June, we have learned.

At CES last week, our Daisy Whitney spoke with Yahoo's Russ Schafer about the expanding program.

In addition to the new hardware companies, Yahoo! announced that several content providers including SkyNews, NBC, DailyMotion, and Brightcove will be joining the service.  The company also announced the availability of a developer's kit so programmers can join the program.

Here's a summary by Stephen Shankland at CNET News.com. And a story by Erick Schonfeld of TechCrunch.

In separate development related to Web programming and smart TV's, the BBC iPlayer will be available in new Samsung TV's, the Telegraph is reporting.